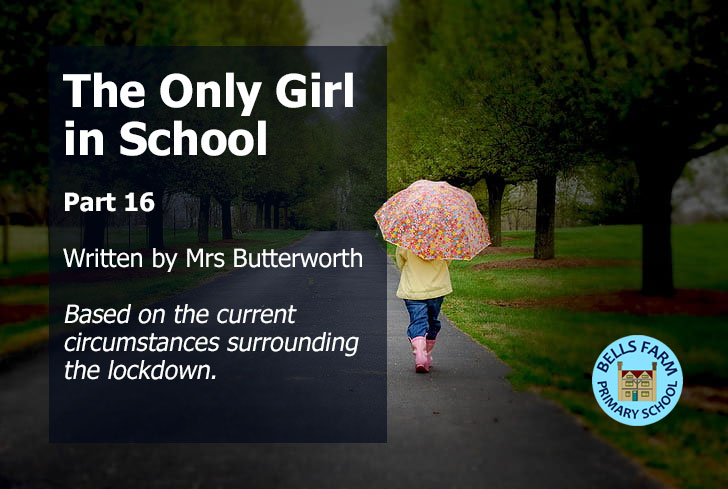 Frankie bit her lip as she watched the figures walk past Miss Taylor, who had not moved from her spot, hand on her hips and shaking her head, despairing at children nowadays. As she watched the stern teacher turn to follow them, she wondered what unsuspecting class of children were going to have to face Sergeant Major on Monday. The thought only distracted her for the shortest time, and as she watched her friend disappear through the doorway and saw it close behind Miss Taylor, she turned to Spike pleadingly.

“Let’s go after them Spike! Billy didn’t say goodbye and he’s going to feel awful when he realises.” Spike, who had been sitting at her feet watching the same scene, shook his head sadly. “He’s gone Frankie. He’ll be okay though– he got what he needed. I think you did too.”

“Well, I got to play with someone else and find out a bit more about the school in the olden days,” Frankie replied, nodding her head in the direction of the building. “But I feel worse than ever now! He just left – gone – not a thought for anyone. I think we could have been proper friends too – we had such a laugh.”

“That’s what you needed then. You made him laugh too and made him feel less alone. I reckon Monday’s going to go absolutely fine for Billy now. He’s had a good chance to talk it all out, and you listened, Frankie. That’s what he needed and that’s what he got.”

Frankie thought about this, but wasn’t completely satisfied despite Spike’s best intentions. “But…” she started, and let the word hang there while she tried to find the right words to show Spike how disappointed she was that the story had come to an end. She didn’t need to think any further– Spike seemed to read her mind and continued. “You found each other, Frankie. You gave each other hope, not just a good laugh, but that was important too. That’s all it can be though Frankie. You can’t stay here, stuck in the past. This bit of your story’s over now and it’s time to get you home.”

Frankie sighed. She absolutely got it, but she thought that if she didn’t sigh, Spike might think she was completely over it, and she really didn’t want him to think she could bounce back that quickly. The truth was, she felt a surge of happiness at the mention of the word home, and although she would never forget Billy, the thought of her mum worrying as much as Billy’s dad clearly had, made her want to get home, and fast. “Okay, so now what? I mean we ended up going through that door when we got to the end of the tunnel thing, but where’s the tunnel now?” A sense of panic overwhelmed her and the dryness of her mouth rendered her barely able to get her next words out. “Oh no Spike! I didn’t even think about that before… I mean, I didn’t really notice it wasn’t there. We were just too busy playing. Stupid, stupid, stupid!” Frankie’s face was in her hands as she ran out of words and stared all around her, willing the appearance of a door, a bump in the ground – anything that looked even remotely like a way back. “Calm down Frankie. You know you can trust me. Do I look like I’m worried?” Before Frankie had the chance to reply, and reply she certainly would, making sure that Spike knew just what the difference in their emotional states was, Spike had once again set off confidently across the field. “Where are you going Spike? Why are you going back to the door? I thought you didn’t want us to go after Billy!”

Spike didn’t break his stride, calling behind him: “I didn’t say I didn’t want us to go after Billy. I said he’s gone.” Frankie muttered to herself, but knew from experience that there was little point arguing with the dog once he had decided his next move. Reluctantly at first, and then with growing curiosity, she followed Spike towards the door. “Gone, is he?” she said out loud, but too distant from Spike’s earshot to get any reaction. “He’ll have to get his stuff first, plus we would have heard a car go.” Happy that she was about to be proved right, Frankie picked up her pace and the two arrived at the door no more than a second apart. “Ready?” Spike asked, looking for Frankie’s approval and waiting for her to answer the door. “Ready,” replied Frankie and pulled at the door.

It didn’t open. Frankie pulled at the handle, a bit harder at first, and then with both hands holding on and her heels dug into the ground, with as much strength as she could manage. Nothing. “What’s going on?” she asked no one in particular, because in her freshly panicked state she was thinking not of Spike, but suddenly and more than a little anxiously about her mum. How was she going to get home now? “Spike! Do something! Bark or something while I yell! They must still be in there!” No reply came. Frankie looked to the ground on both sides, and then behind her. “Spike! SPIKE! Where’ve you gone now? It’s not funny – I need you!” Moving away from the door now, Frankie looked across the expanse of the field, putting her hand on her forehead the way she’d seen people do, as if it would help her locate a small, faraway ball of black dog. “Spike!” she called out once again, even though she knew that as he was clearly not on the field, he would be too far away to hear her cries.

She turned back and tried the door again, hoping that in the topsy- turviness of her world, some kind of magic would have taken over and it would open with ease. The door still stubbornly refused to give in to any sort of witchcraft, and looking around, she realised why. There on the wall was the code pad which the teachers waved their security passes at to open the door. Just for a minute, she felt relieved that she wasn’t stuck out here forever, that someone would eventually appear from inside or out, and let her in. But then she took a second look. What was a code pad doing on the wall? Were they around when the school was first built? Frankie wasn’t an expert, but forty four years was a long time ago and Billy hadn’t even heard of cable TV! As she tried to process this latest observation, the whole situation started to turn into a tidal wave in her head, and as it threatened to rise further, her head decided to reduce the pressure. Frankie began to cry. Fat tears tumbled down her face, and then she heard herself sob, at first softly and sadly and then urgently and loudly, as she banged and banged on the door with small determined fists. “Let me in! Please! PLEASE!”

She stopped. If her ear hadn’t been so close to the locking mechanism of the door, she would never have heard it click. But by then, her face was leaning on the glass as she continued to thump despairingly at the wooden frame. She stepped back, and noticed for the first time that the dark blue blinds were closed. Why hadn’t she spotted them before? Again, they had no place in 1976, and although she didn’t remember seeing any loud floral curtains on the door, they would certainly be a better match for the rest of the school.

She felt her heart lift as the door began to open, slowly at first as the blinds were pulled back at the same time, and then wide enough for her to see who was behind it. “Miss Williams! What are you doing here?”