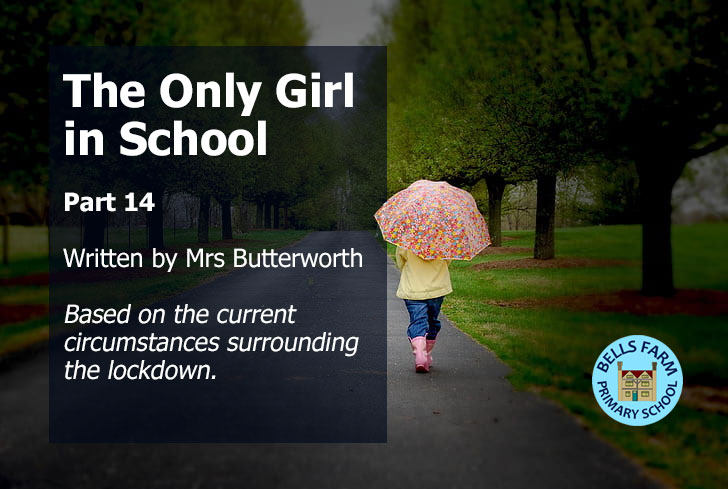 Billy moved his finger to a smudged area of grass, its shade lighter than the rest of the scene. “He was just there, sitting down, but with his tail still wagging like it always did. I drew those little curvy lines with a pencil – you know, the ones that make things look as if they’re moving. You can just about see them if you look really closely.”

Frankie narrowed her eyes and moved her face nearer to the picture. “I can see them! They’re really light but, I can definitely see them!” She sat back triumphantly – both pleased with herself, and pleased with the experience she was sharing with her friend. Billy’s face told the same story, and for what seemed longer than the few seconds it actually was, the two children simply looked at each other, an invisible thread connecting them.

The moment was interrupted by a thumping sound – at first too muffled to register, and then becoming increasingly loud. Both children turned to look at Spike, who had been quiet for some time, but was now craving attention, as his tail frantically indicated. Frankie moved towards him, her arms encircling his neck, and her hands affectionately rubbing at his chest and sides. “I guess I should be calling you Bob now, Spike!”

Although he was enjoying the fuss and attention, Spike felt the need to break himself loose from Frankie’s embrace, realising that she still had much to learn. “No, I’m your Spike and I’m his Bob. I am what you needed when you needed someone or something. At least, I hope I was. I’ve had a bit more time with Billy, and I think he gets it now.”

Billy nodded in agreement. “I was heartbroken when I painted Bob. He was far bigger in real life, with longer legs and not as…blobby.” Spike’s nose twitched in protest. “Sorry Bob, but I’m no good at painting. I got your eyes too small for a start, and then made a right old smudgy mess of them when I tried to fix things. That’s why I hardly recognised you when you came back – they’re much better now!”

“Yes, well, I decided to keep the upgraded version,” replied the dog. “Funny enough I can see better now!”

“So you’re not Billy’s dog then, you know, the one that died?” Frankie asked. She felt more confused than ever. Had a real dog come back to life? It was a spooky idea, she thought, and although it might be a magical event for the owner, it made Frankie shudder slightly and think of the ghost stories she always avoided at the library. “No,” replied Spike, “Like Billy said, the real Bob was a lot more handsome than me. How rude of him!” Billy bit his lip, and then opened his mouth to apologise again, only to be reassured by Spike baring his teeth in the widest of smiles. “Let me explain,” he said, “come on, sit down, this could be while – I’m still getting used to making sense!”

So the friends made themselves comfortable as they sat at opposite ends of the picture, while Spike did his best to help them find their way through the maze of events. He told them that Billy had put his heart and soul into painting every creature in the picture, because with every brush stroke he was thinking of his living, breathing and most beloved Bob. “And by the time he came to paint his old dog, all the love he had for him just kept pouring out onto the paper.” Billy blushed, but not through embarrassment at Spike’s words – he completely agreed with everything he had said. “I just wish more artistic skills had poured out, that’s all,” he mumbled sadly.

“It’s not about the skills though, is it Billy?” said Frankie, who was by now keeping up with Spike’s train of thought. “It’s about what you put into it – all your emotions and feelings and everything. That’s what makes something special isn’t it Spike?” Spike nodded.

“It is Frankie, and your picture is special for so many reasons, Billy. Those feelings you had couldn’t just fade on the page, and without knowing it, you sent out the signal for help to cope with them. Tell Frankie what made you paint that rainbow.”

Billy explained that he had seen a rainbow the day before he painted his picture. In fact, that was really what prompted and inspired him. His dad didn’t believe him, saying that they only appeared after rain, and with this being the hottest summer ever known, with people desperate for water to no avail, rain was distant memory. “I know I saw one though. I didn’t go on about it – didn’t want Dad to think I’d gone mad. He’s not even seen the picture because I think he’d laugh or start his weatherman act again.” Billy rolled his eyes and Frankie laughed in recognition; parents could be such experts.

But Spike had a different view. “I don’t think he would laugh. Maybe he would accept that you saw what you needed to see, just at the right time. You know that rainbows are a symbol of hope, don’t you? They’re a sign of better things to come. That’s what you needed when you were feeling as sad as you were, and that’s why the rainbow appeared to you.”

After a pause to let his words sink in, Spike added to his explanation. “Rainbows aren’t just arcs in the sky, you know. They’re actually complete circles, but you can only see half of them. Unless you’re in an aeroplane apparently.” Frankie and Billy looked at him, both faces betraying what seemed like total confusion. Spike thought that either he had lost any hope of them ever understanding him completely, or he had perhaps gone too far with the science bit. “I read that somewhere,” he added, somewhat sheepishly. “Google, I think.”

But neither child was confused any more. In fact, they were now united in their clarity about why this had happened. Frankie spoke for them both. “We’ve made a complete circle, haven’t we? The rainbows have joined up – your sadness and mine have met each other.”

Billy nodded. “I think so, I really do. We painted our rainbows to give us hope, but we would never have known if it wasn’t for you Bob…Spike…our friend!” He laughed, and passed the wave onto the others, who gladly joined in. The sight of two children from different times, plus an odd-shaped dog with spindly legs and comical eyes, laughing and hugging each other, was not one that had been seen on the new school playground up until now. It was unlikely to be repeated.

Frankie still had so many questions for Spike – about how he knew so much about everything and why he had chosen the two of them to share his messages of hope. But for now, she just wanted to use whatever time she had left with Spike and Billy to play, laugh and properly enjoy life for the first time in days. Reading her mind, Billy broke free from the embrace, his face glowing with anticipation of what was ahead. “Come on, let’s explore this place together properly, before the whole world takes over!”

No persuasion was needed: the three unlikely companions began running across the playground, heading for the field and whatever it held for them at the dawn of a whole new era of school life. Renewed laughter filled the air, and with that and the distraction of the sights around them, Billy’s next words were almost drowned out and remained unanswered.