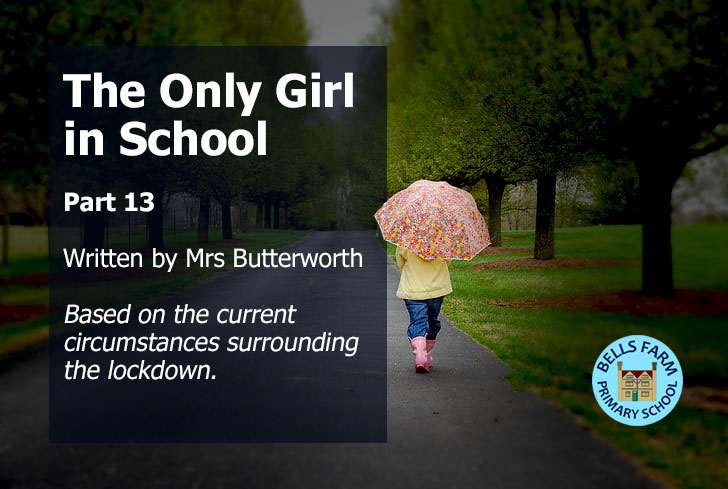 The two children looked at each other and then, rather blankly, back at Spike. He thought he had delivered that very important message in an appropriate manner– just the right balance between very serious and very caring. He knew that he wasn’t a public speaker of note, but all things considered that wasn’t bad at all, and yet…. “Well, what I mean is…well…tell you what, just look at Billy’s picture, both of you, and tell me what you see.”

Frankie and Billy were happy to oblige, because Spike was beginning to look uncomfortable and was definitely sounding a bit frustrated with them. Frankie began, in a squeaky voice which she hadn’t called on since nursery class. “I see lots of dogs and cats and birds and trees and a rainbow and…”

“Yes, highly amusing Frankie…. I mean, what do you really see?”

“Okay – sorry. It’s just, this is all so weird. I don’t even know where to start with telling Billy what’s happened to me…to us. I’m …I’m not exactly from round here. Well, I am, but not now… if you see what I mean.”

But it was clear that Billy didn’t see what she meant, and actually, Frankie thought, why should he? Perhaps now was not the right time to share the whole time travel business. Perhaps Spike was right – just focus on the picture and let everything take care of itself when the time was right. “Well,” she began again, “We both like our rainbows, don’t we? I painted one just like this yesterday!”

It was Billy’s turn to respond, and he took the task as seriously as it was intended. He studied his own work, piece by piece, mentally magnifying each detail, some of which he had all but forgotten – like the small white house nestling between the slopes of bluish green hills, its slanted chimney smoke signalling a windy day. “That was where we lived, miles away from here. On the day we moved, I cried. I didn’t want to leave my friends behind, and I missed my dog so much – even more than when I first lost him.”
Frankie face was a puzzled frown. “Well why didn’t you take him with you then?”

Billy sighed heavily. “He died. It was just a few weeks before the move. He was quite old – not as old as dogs can get, but, you know, pretty old. He got sick and I just knew he wouldn’t get better and well, yes, he died.”

The light breeze stilled, and even though the birds had been singing their small hearts out not ten minutes ago, they now seemed to have fallen silent in respect. Billy sat back, tilted his head and wiped his cheek with the back of his hand.

“Sorry Billy,” said Frankie, and realising that anything else she might add would upset her new friend even more, she turned the subject in a different direction. “You really like dogs though, don’t you? I mean there’s loads here, hundreds, or at least twenty anyway, or maybe not that many… I’ll count them, shall I?” Stop talking, she thought to herself, just stop. But Billy’s sudden laughter broke the awkwardness. “If you were to count them, I suppose there’d be about ten! But I guess that’s a lot, and I really do love dogs.”
“So which one’s yours then?” asked Frankie, as she vowed to work at her maths for the remainder of lockdown.

“Oh, he’s not there. This one’s Katie – she’s still alive, and she’s a bit happier now as well. That one’s a golden Labrador, because I love them, but my dad thought they might be too much work. I’d call him Alf if he was real. This is my best friend’s dog – not my thing really, poodles, but he is so cute – and really, really yappy… and that one over there, he’s a … don’t know what he is, I think I just made him up!” Billy’s face beamed with pleasure as he talked about his beloved animals.

Frankie’s eyes scanned the entire scene, taking in all of the dogs of course (and counting them – there were actually nine, but the moment had passed), and also picking out groups of birds which Billy had obviously become a little carried away with painting. Some were in flight and reduced to pairs of m-shaped wings against a pale sky, and others were on the ground, balanced on legs which Frankie thought might look more at home on one of the smaller dogs. As they idly pecked at the stubby grass, a large ginger cat watched malevolently, its well-fed body reducing any chance of stealth or pouncing ability. A single bird, looking suspiciously like an eagle, (Billy really had gone over the top), sat in a tree which was planted in the centre of the picture, its branches zig-zagging through rather too perfectly rounded foliage. Art really isn’t his strong point, thought Frankie, her mouth twitching into a grin. Then she remembered that Spike had begun life as a few clumsy brushes of black paint covering a dodgy unicorn, and she rapidly turned the smirk into a kind smile.

“It’s a great picture Billy, but I don’t get why you didn’t paint your own dog into it. I mean, you even painted a cat which seems a bit strange.”

“I know. That’s Lottie, and she did nothing but fight with him, so I wasn’t sure about putting her in. But that’s cats for you, and even she seemed a bit quiet and sad when he was gone. I did paint him though, but he had disappeared by the next morning.”

Frankie nodded, and carried on studying Billy’s picture, different creatures emerging with each new visit.
And then she looked up, her eyes wide with realisation.

“Just like my dog disappeared. Just like Spike. Spike is really your dog, isn’t he? His real name’s Bob.”