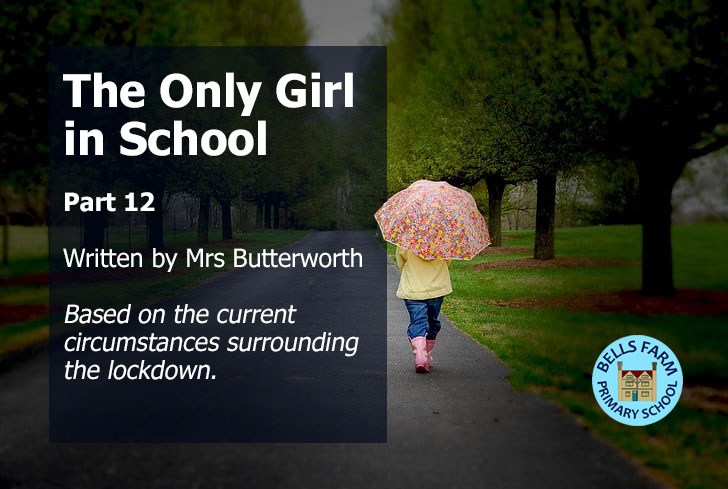 Frankie found herself slightly distracted by the lettering on Billy’s shirt. She was sure she could make out ‘BCFC’ but it was all a bit of a squiggle, and didn’t resemble any football shirt she’d ever seen. “Hold on, what’s wrong with me?” she thought, realising that the state of the boy’s outfit should have been the least of her concerns. She looked up at Billy’s face and saw that he was smiling nervously, and extending his hand, ready for Frankie to shake. “Err, are you mad?” came her response, “Not being funny, but I don’t know where you’ve been!” Billy dropped his hand by his side, and Frankie could almost feel the heat radiating from his face as his cheeks reddened.

“Ah Frankie, no need to worry yourself. This is a virus-free zone! You might catch a cold off someone, but other than that, you can rest easy.” Spike’s words were gentle, and Frankie instantly felt guilty for making Billy feel so embarrassed. She smiled kindly at the boy and started again. “Pleased to meet you, Billy,” she said, extending her own hand, which was happily clasped by the boy, his face breaking into a wide grin. “Hello,” he said, “I’m so happy to see someone apart from my dad and Miss Taylor. No offence to my friend here!” Billy looked at Spike, and the dog nodded his head in a “none taken” gesture.

Frankie felt an instant connection to this boy, although she couldn’t for the life of her work out why. He was a lot taller than Frankie, with long milk-white legs and equally pale arms, which he waved around for no apparent reason as he spoke. His hair was a reddish blonde, its curls sitting awkwardly on his neck, some parts naturally spiralling, others sticking out at comical angles. His face had now faded back to its normal colour – almost translucent in its lightness, but peppered from forehead to chin with freckles. It was the sort of face which readily showed its owner’s happiness, as it was doing now, but ever prepared to retreat back into a default setting of awkwardness and worry.

“Thing is though, Bob, I didn’t know where you’d gone to! I searched everywhere and in the end had to give up when my bike went over some glass and I couldn’t get round the estate. Well, I could if I’d walked, but I was pretty fed up by then.”

“Bob? Who’s Bob?” asked Frankie, although it seemed obvious that Billy was talking about Spike. Spike – stroke – Bob looked from one child to the other, and sighed deeply. “I think it’s time to explain a few things, isn’t it? If I could just work out where to begin….tell you what, why don’t you get to know each other first? I’ll fill in the gaps afterwards. I mean, talking’s more a human thing isn’t it? You’ve had loads more practice!”

So although Frankie felt a bit cheated, (especially as Spike chose that moment to become more dog, and ran off mumbling something about needing to chase a squirrel off the playground), she liked the idea of having someone else to chat to – even if he was yet another boy. Her latest friend seemed equally keen, and together they wandered through the remaining classrooms and out towards the playground. Billy led the way, walking over to an obviously new and as yet unpainted bench, which faced away from the Woodland Walk…or more precisely, where the Woodland Walk should have been. In its place was a dense mass of overgrown hedges, the countless shades of green broken only by dots of white bindweed. Frankie followed him, her mind trying to imagine where the chicken house would fit into this leafy tangle, and hoping that she wasn’t about to hear the terrified clucking of hens, desperate to escape the darkness.

They both sat down and began to talk. It was surprisingly easy, Frankie thought, probably because there was so much they could learn from each other that might start to unravel the mystery of a talking dog, underground tunnels and unplanned time travel. Billy was as fed up as Frankie. He was new to the area, and although his mum and dad tried to help him fit in, buying him a Birmingham City football strip turned out to be the wrong decision in a neighbourhood of Villa fans. He was due to start school here on Monday, and was dreading it. Being the son of one of the teachers was bad enough, but then finding out he was in his dad’s class…well, that was the final straw. After that, he spent most of his time on his bike, but even that was interrupted by having to come to school every day, what with his mum working and his dad having to put in the hours sorting out his classroom, and having meetings about the “grand opening” on Monday.

“Seems a bit over the top doesn’t it?” remarked Frankie. “I mean we have assembly and everything first day back, and Mrs Butterworth smiles a lot and walks around the classes a bit, but it’s hardly a ‘grand’ occasion!”

“No, I get that,” replied Billy, “but this really is a big deal. It’s the first day ever on Monday. The school’s brand new! You mustn’t be from round here – you would have noticed something. They must have been building it all year.”

It suddenly dawned on Frankie that Billy had no idea how complicated this all was. No idea at all. As far as he was concerned, Spike had just made friends with the two of them, and then introduced them to each other in the hope that they became friends. Clearly Billy had some idea that the whole thing was a bit strange, especially the communication with a dog who answered in perfect English, and even started up his own conversations when the mood took him. However, in Frankie’s world, a chatting pet was becoming the least odd thing going on. How was she going to begin to tell Billy that she wasn’t actually born at the moment? How would she explain a tunnel which took her back in time, when she had no clue what that was all about herself? No wonder Spike took off like that, she thought. Of course he had no words for what had happened. Just as she began to think that it might have been better if she had continued to work on the unicorn in her picture and left the black paint well alone, her thoughts were interrupted by Billy. “Frankie! I asked if you lived round here. You drifted off for a bit there.”

“I…I do. Well kind of…I mean, I’m wondering if my house is even built yet!” As her words echoed a thought she didn’t even know she had until it was spoken, Frankie wondered later whether her sudden tears were due to panic or sadness, or a very unpleasant mixture of both. It didn’t matter really – now they were here, they tumbled freely down her cheeks, and despite her attempts to wipe them away, new drops kept spilling. As Billy was about to ask her what the matter was, and consider whether a bit of a hug might be the right thing to do, a familiar voice resounded across the playground, and Billy was spared further embarrassment. In truth, he wasn’t a natural hugger.

The voice was loud but the words unclear, due to its owner trying to grab the children’s attention whilst carrying what looked like a very large sheet of paper between his teeth. As Spike ran towards them, the paper flapped up and down to the rhythm of his steps, and it looked like he was attempting some kind of land speed or flight record. The sight made Frankie chuckle softly, and as she could always depend on her laughter to be contagious, Billy duly caught it, and the children’s shoulders began to shake with mirth. Spike stopped in his tracks, a look of irritation appearing on his usually cheery face, and he sullenly dropped the paper to the ground.

“Well, in your own words, Frankie – how rude! There I was, rushing to your side when it was all getting too much for you, and there you are – making fun of me – again!”
“Oh Spike, I’m sorry, I didn’t mean to hurt your feelings!” Frankie responded, but the top was off the bottle now, and the laughter kept pouring out to replace her tears. “I’m sorry! I’m sorry!”

Not being one to hold grudges, Spike smiled back at her, apology accepted, and proceeded to pick the paper up once again and trot over to the bench, his speed well and truly modified. “I didn’t know where to start, like I said, so I thought this might start things for me. Come on, take a look.”

The two children knelt on the ground beside the sheet of paper, which Spike had patted down with his paws to get rid of the ‘wings’. He sat on a corner to keep it in place, and just as he was about to speak, Billy leant forward to study the sheet more closely, and called out, “Hey! That’s my picture!”

Spike nodded wisely and once again, opened his mouth to speak, only to be interrupted again, this time by Frankie. “That’s quite like my picture Billy. The one I did when…on…oh never mind – I did a picture. Like this, with a rainbow like that. Only mine had a unicorn, well, it did and then it turned into a dog, well I turned it into a dog, and then, well, it turned back, and…”
“Babbling, Frankie,” came Spike’s voice, at last squeezing in a couple of words, but instantly regretting them being the rather ill-mannered sort. He cleared his throat, looked at Frankie sheepishly, by way of an apology, and at last began. “It’s all about sadness and then hope. That’s what brings you two together, what you have in common. That’s why I’m here.”