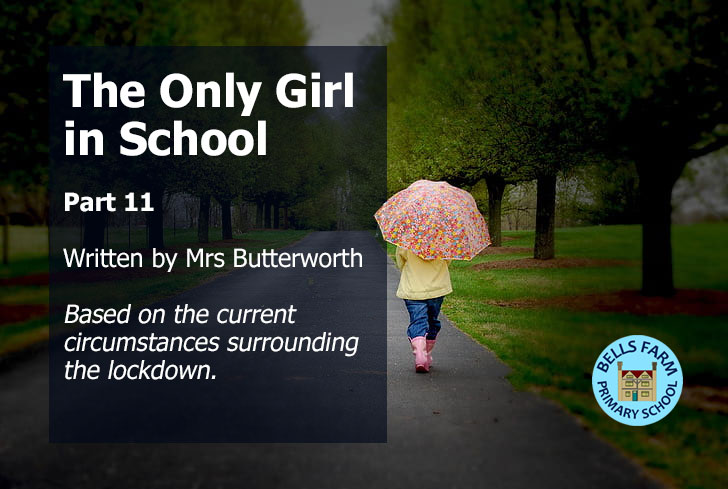 If Frankie had been holding anything in her hands, whatever it was, breakable or not, would have dropped from her grasp with a dramatic crash to the floor. Instead, her hands balled to a pair of fists and she felt her eyes well with tears of genuine fear. This wasn’t an adventure any more. This was a nightmare trap, in a time before her mum was born, let alone Frankie herself. Looking around, she took in details that had been overlooked at first glance. Varnished wooden chairs were tucked under matching desks, ready for unknown groups of children to begin their learning. Heavy fabric curtains framed the windows, their sunflower patterns sitting on a background of the murky brown which seemed to dominate everything in this time period. The display boards, although clear of children’s work, were covered in part by instructional posters…the alphabet here, school rules there, and a list of jobs on a grid: milk monitors, prefects, dinner servers and register collectors. As her eyes moved to an oversized map of the United Kingdom, hanging from a picture rail and weighted in position by a solid metal bar across its base, she felt warm breath on her leg, and realised with some comfort, that Spike was once again at her side.

“Well, that’s not changed much, has it Frankie?” came a voice clearly intended to reassure the frightened girl. “I mean, we’re still on there, Queen Elizabeth’s still on the throne and as far as I know, Birmingham’s still right there in the middle of England!”

The words didn’t help. Not one tiny bit. Frankie’s fear turned to frustration as she gave her reply. “We are nowhere near where I want to be! We are in a history book Spike, and I want to get out of it!”

“We will Frankie,” the little dog insisted. “We absolutely will. I never dreamt you’d feel like this, really I didn’t. I’m sorry, I should have thought. But as I said before, trust me and keep trusting me. I won’t let you down, I promise. Come on, there’s someone I’d like you to meet.”

“Oh right! Like Mr and Mrs Peculiar over there? Yes, well, they loved meeting me, didn’t they? Couldn’t stop chatting and asking me how I was! Face it Spike, we’re on our own here!”
Frankie pointed at the strangers who by now had moved to the back of the classroom to sort through a collection of crayons and pencils. They continued to talk and laugh, their voices as feeble and muffled as before. “No, not them! They really have no idea we’re here, bless them. Nice folk though – you’d like them – although that one seems a bit on the strict side from what I’ve heard.” Spike pointed at the woman, who by now had cast off her clunky shoes, and was padding round in her tan coloured stocking feet.

“What you’ve heard? What? Spike, how do you know so much about this place? I only painted you yesterday, or today, or I don’t know … forty years in the future!” Frankie thought hard, desperately trying to come up with a number line in her head to work out exactly how far back in time they were. She decided forty years was near enough, and quite satisfied, folded her arms and looked questioningly at her friend. Spike let out a giggle, but as Frankie flashed a warning look, he realised it was too soon for laughter. He quickly changed the subject. “Follow me Frankie. You won’t be disappointed. Let’s escape the big people.”

Frankie sighed – a sound with which Spike was getting more and more familiar as time went on (and back as it turned out). But there seemed nothing else for it. Stay here and be ignored by teachers from the distant past, or venture forth and trust Spike to deliver on his promise? Frankie opted to follow the eager dog, who clearly presumed that she would do just that, as he had already taken off through the year four classroom. “Wait for me, Spike! How rude!”

Although Spike was determined to cover ground quickly, and had no intention of taking in the changed landscape of the school, Frankie was now in her own classroom and was keen to see what was different. Quite simply, but not unexpectedly, everything had changed. The room was a replica of the year five classroom, with the very odd exception of a bicycle, propped up against the blackboard, its rear, exceptionally large tyre completely flat and clearly not fit for use. Otherwise, it was gleaming red and shiny with newness, its wide handlebars hovering over a very small front wheel, and a saddle which looked more like a small leather chair. Frankie had seen bikes like this on the internet, and as she struggled to think of what they were called, she spotted the black lettering on the down tube: Chopper.

Who did the bike belong to? Frankie pondered on this and peered back through the door window at the Strangers of Year Five. “No chance,” she thought, “not with those shoes and that tie!” For the first time, in what seemed like days, she started to giggle, and as she covered her mouth to stop herself, she remembered that she was in her own little soundproof bubble. It was a much-needed relief. Frankie threw her head back and began to laugh hysterically at the thought of adult legs pedalling furiously on the contraption.

By the time Spike had doubled back from the year three classroom to see what the joke was, Frankie was practically on the floor, her tears this time happy and childish. “Have you seen this Spike? I was just thinking…ha ha ha ha! …of that lady….ha ha ha!…with her big heels and her … ha ha ha! …knees knocking on her chin! Ha ha ha ha ha!”

Spike looked down at Frankie, who by now was rolling helplessly on the carpet, and he wondered if it would be appropriate to give her just a little tap on the side of the face to help her back to sensibility. But actually, he liked this side of her, and any fear or anger she was showing only minutes ago had evaporated and been replaced by sheer glee. “That is really funny Frankie. Ha ha! Just the thought of it! No, Billy would never let that happen! I reckon if it did, that’s what caused the puncture!” As Frankie’s last laugh ran short of air, she paused and drew in a far more serious breath. She stopped rolling, and lay on her back, looking at the ceiling with its series of fluorescent strip lights. “Who’s Billy, Spike?”

“Oh he’s my other friend! The one I wanted you to meet! Matter of fact, that’s his dad in there, you know, the one with the bad tie!” Frankie sat up suddenly, her back straight and rigid, the remnants of her laughter just tear tracks on her cheeks. “How have you got another friend, Spike? I’m not being funny or anything, but I painted you and it’s just been you and me and … and …all that stuff out there,” said Frankie, nodding her head in the general direction of the windows.

“Um…right. It’s a tricky one this, but he was actually my friend before you were. I mean it makes sense, doesn’t it, what with this being forty four years ago and everything?”
Frankie frowned, partly because her maths had been out by four years, and that was most annoying, and partly because, no, it didn’t make sense – none of this madness did. But if she was honest, the frown was mainly due to a pang of jealousy which had entered her crowded mind. Spike was her creation and her friend, and she didn’t know if she was ready to share him – least of all with someone who had apparently been there first. Who was this Billy? How could he have met Spike? How could Spike be two places in time at once? The questions, if she had let them, would have kept coming all day and night, but questions without answers soon lost Frankie’s interest, and she chose instead to shake her head and stand up.

As she got to her feet, Frankie noticed the fibres of the new carpet clinging to her tee shirt and shorts, and began to pick at them, the nylon static crackling as she did. Occupied with removing the unwelcome bits of yellow fluff which added nothing to her outfit, Frankie didn’t notice the sight or sound of the door swinging open. So as she looked up to find that she and Spike now had company, in the form of a boy dressed in a blue and white football strip, she physically jumped, her eyes wide and her mouth inhaling a short, sharp breath.
“Frankie, I’d like you to meet Billy,” came Spike’s voice, “the only boy in school.”