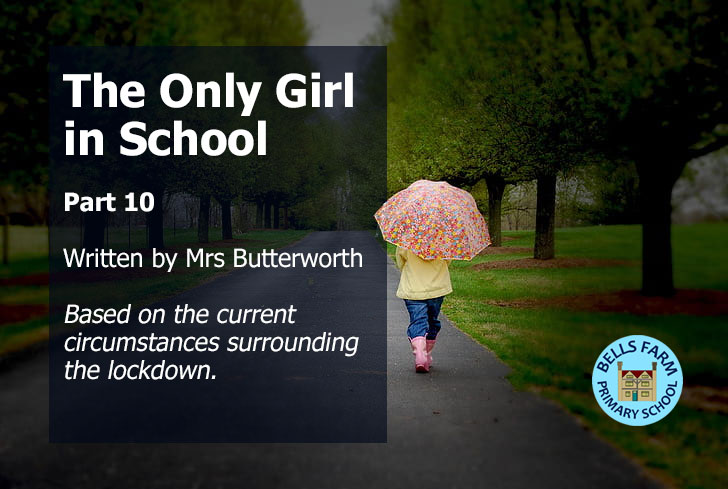 Spike didn’t answer. In fact, he didn’t even try to look as if he was thinking of an answer. Instead, he sauntered down the corridor as if he was going on his daily walk, and left Frankie and her furrowed brow behind. “Spike! SPIKE! Where are you going? You can’t just take off like that – someone might see you!”

Spike stopped and slowly turned his head back to face Frankie’s exasperated look. “Who, Frankie? Who exactly do you think is here?”

“Well, the teachers of course! And the boys…unless…unless…” Around a million thoughts crossed her mind as Frankie struggled to process the madness of her world. “Unless they’ve all gone home. Unless it’s been weeks and Mr Evans has been decorating.”

“And laying a new carpet? And if he had, do you really think he’d pick this one?” Frankie looked down and immediately saw what Spike meant. The carpet was a gaudy swirl of browns and mustard yellows – like something she had seen in her Great Nan’s house – certainly not the calm ocean blue of the corridor she was used to. No, this was definitely not ordered by Mrs Butterworth – she might be old but she hadn’t lost all sense of style. Somehow, the mystery of the changed décor of the school was a far greater puzzle than the picnicking tigers and egg-carrying rabbits she had seen only a short while ago. This was real, but somehow unreal. Frankie didn’t like it one bit.

Spike walked back to her side with an expression as sympathetic as he could manage, despite the limitations of his painted face and googly eyes. “Frankie, there’s no one here. Well, no one you know anyway. Come on – I’ll prove it.”

“Spike, you’re scaring me” came Frankie’s timid voice – its tiny volume surprising them both. She coughed to clear her throat and compose her thoughts, and began again. “I don’t get what you mean. If Miss Williams and Miss Coghlan aren’t here, then who is? Can you see something that I can’t?”
“Not yet. Not here, but in the classrooms. Can’t you hear the noise?”

Frankie listened. When she really, really strained her ears she could most certainly pick up sounds, but would never have described it as noise. Noise was getting changed at the swimming baths, or queuing for seconds in the dining hall, or the first dry play after a rainstorm, or… “Frankie! Can you hear it yet?”

“I think I hear a man’s voice,” came Frankie’s reply. “Yes…yes I do! Talking to someone – a child? No, that’s another grown-up – a woman. I don’t recognise either of them though.”
The voices were coming from the top of the corridor, and as the friends tip-toed closer, the conversation was narrowed down to the year five classroom. Spike curled his head around the corner and then, just as slowly, withdrew it. “Yes,” he confirmed, “two people, having a chat and a bit of a laugh. I’m sure I know them, but they’ve got their backs to me. Let’s go and take a closer look.”
He began to move towards the doorway, but his adventurous spirit was interrupted by a hand grabbing at the fur on his back, lifting him off the ground. His legs continued to move comically in a cartoon motion, protesting at Frankie’s action. “What’s the matter now Frankie? Don’t you trust me?” Frankie gently put Spike down, but her hand remained steady on his back, its message unmistakable. Spike read her loud and clear. “It’s okay, it’s okay. I’m not going anywhere without you. But Frankie, it’s fine – really. No one’s going to see us – we can go anywhere we like!”

“Oh right, that’ll be the cloak of invisibility that I’d forgotten all about, Spike. Fine, I’ll just put it on. Can you help me tie it at the top?”
“Very funny, Frankie. But you’re kind of right. No ties needed though. Believe me – they won’t be able to see us.”

Frankie had long run out of looks of amazement and had to settle for one of complete and utter disbelief. “What are you talking about, you daft dog? Of course they’ll see us. If we can see them, they can see us!” Though slightly hurt at Frankie’s words, and, as he was to share with her later, rather annoyed at being lifted up in such an undignified manner, Spike was determined to enter the classroom, and his next defiant actions spoke louder than Frankie’s arguments. Once again, he tried to nudge the door open with his nose, and when this failed, began to jump up towards the handle. “Well? Are you going to help me or not Frankie? You know you’re better at this than me, and you’ll soon see I’m right!”
Frankie sighed. “It’s a pull, not a push,” she whispered, and very slowly opened the door.

If Frankie had been visiting the school for the very first time, and if she didn’t really know what a classroom should look like in the 21st century, the room would not have seemed too remarkable. But Frankie walked through this room every day. This was not year five any more. This was not like a single classroom in the entire school. This was a living, working museum.
Sitting on a wooden desk was a woman, her hair tightly scraped back into a thick greying bun, and her feet clad in bright red shoes, their clunky heels resting on a small chair. A tall man stood in front of her, dressed in a shirt with a thickly knotted tie, its stripes broad and dazzlingly bright. They were still talking, and yet the volume hadn’t increased despite Frankie and Spike’s closeness to the strangers – not one notch. Frankie could make out a few words here and there…. “opening doors….hard to know…some kind of celebration…books not arrived yet…” but trying to make sense of it was like listening to an old radio being tuned and having no idea what the changing programmes were about.

Frankie looked around the classroom, trying to locate familiar spots to get a proper sense of where she was. The library corner was usually to be found at the back of the room, with its brightly patterned bean bags and revolving stands of new and well-thumbed, much loved books. Now all she could see was a continuous row of desks, a poster instructing children to drink milk, a map of the world nailed firmly to the wall, just above a complete set of times tables. “Well, some things don’t change then,” she thought with some unexpected relief, not being a fan of learning things off by heart. She turned her head back to Spike to share her observation, but he was no longer at her side. Frankie heard him before she saw him. The little dog was singing. Loudly…. and tunelessly.

“SPIKE! Get down from there and stop the noise!” She looked on in despair as she took in the sight of a small, painted, talking and now singing dog, jumping around in circles from desk to desk, at one point even leaping across the strange woman’s lap and over the strange man’s feet. “For goodness’ sake! They’re going to go mad”
“I told you! They can’t see us! We can do anything we want! Here, play ‘head the ball’ with me!” he squealed in delight, as he spotted a box of assorted footballs in a net, hanging from a large hook on the wall.

“What do you mean?” she whispered, needlessly now that Spike had long since broken the calm with his antics. “They must be able to hear you at least – especially with that awful singing!”
But despite every atom of her body and thought in her mind telling her that there was no way that she and Spike were in some kind of bubble which made them silent and invisible, the evidence was clear. The strangers carried on talking, and at one point, even seemed to look directly at Spike, but their lack of reaction proved that he must be right. Again. Just as she was about to ask him for some explanation, (which would have been a useless request, as by now he was tearing at the net, determined to release a large red ball), she noticed that the man was starting to write on the board.

It was jet black, like a huge computer screen, but Frankie couldn’t see how or where it was plugged in. Then, as she watched the man carefully scribing in perfect joined up handwriting, she realised he was using chalk, and remembered using a play board like that when she was in reception class. Frankie couldn’t help admiring the satisfying loops and perfect ascenders and descenders that were being recorded in front of her. The man himself seemed most pleased with himself as he stood back to check the straightness of the line. For the first time, Frankie could just about make out an entire sentence of dialogue, as the woman commented: “Well, may as well be prepared.” Then, as the man moved away and replaced the chalk in a small tray, Frankie could see the writing in its entirety. Although she was still some distance away, and not accustomed to reading white on black, she found that if she narrowed her eyes slightly, she could read the information perfectly well. So she did.

It was at that moment that Frankie’s shock made the walls of the room seem to rapidly and insistently come in towards her. The words were simple, and if she had read them in a book, would not have blinked an eye before turning the page. But this wasn’t a book, and what surrounded her was the reality of the world she found herself in, whether she liked it or not. She heard her voice faltering as she read aloud: