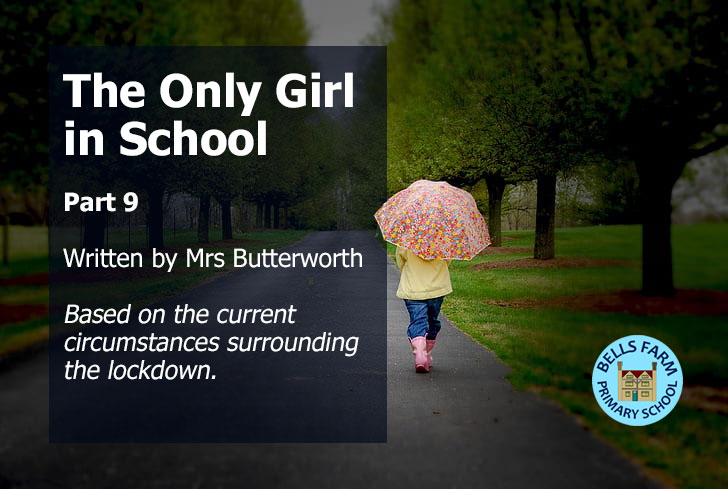 It wasn’t a gradual change of darkness into light. It was sudden, shocking, and even in this upside down world that the friends found themselves inhabiting, it was quite unbelievable. All the vivid colours of the rainbow were represented, but instead of arching across the sky, they were shooting this way and that, from ceiling to floor and from wall to wall. Occasionally, the beams grew weary of their dramatic motion and began to rotate – at first quickly, then lazily, changing direction as if trying to escape the threat of returning darkness.

It was the intensity of the colours which would stay in Frankie’s memory forever – she felt as if they were standing in a kaleidoscope, waiting to be twisted in and out of visibility. But whatever mixture of feelings she had about the strangeness of it all, Spike clearly displayed only one – pure joy. “That’s more like it! That’s definitely closer to what I was expecting. Isn’t it marvellous Frankie?”

Frankie, not for the first time, struggled to take in the fact that her friend had anything even resembling expectations. As far as she was concerned, this was just the latest scene of the sort of dream that always followed on from too much cheese before bedtime. “But what is it exactly Spike? What does it mean? How do we get out?” The questions tripped quickly off her tongue and really, they weren’t even the questions she wanted to ask. She just didn’t have words for those, and her four years of primary science just didn’t cut it when it came to explaining this as anything other than magic.

“You’ll have wait a bit longer, Frankie. It will all become clear, I promise. What don’t we just sit back and enjoy the show. You’ve got nowhere else to go have you?” Frankie thought that even if she had ever had the opportunity to program her newly created dog, she was quite sure that sarcasm would not have featured on the menu. She gave Spike one of her looks, but the dog just returned it with a look of his own, an attempt at a serious face which couldn’t fail to make Frankie laugh. “That’s better! That’s the Frankie I like to hear. Now make yourself comfy – it could be a while.”

It was a while. Frankie didn’t know if they had been sitting against the wall drinking in the light show for minutes or hours – her mind dizzied by the display. They were certainly comfy; the little painted furball had snuggled into her side without a second’s hesitation and Frankie automatically stroked his head to the rhythm of the beams. Then, just as she thought a bucket of popcorn and a bottle of pop would finish the experience off nicely, the lights grew dim, the flashes slowed down and the beams, starved of energy, faded against the dullness of the walls. As the last wash of colour disappeared, the passageway was still and lifeless again, the air only punctuated by Frankie and Spike’s slightly unsteady breathing.

Then, something dawned on Frankie. The blackness was gone, replaced by a dusky grey which, despite its drabness, allowed her to fully take in her surroundings. The walls were as curved as she had felt them to be, and the passageway disappeared around a bend where the darkness found its home again. She felt as if they were sitting in a gigantic hosepipe, just waiting to be sprayed onto the field. Spike uncurled his body, stretched his legs, and looked back at Frankie. “Well, time for the next adventure my friend! If I’m not mistaken, the way out is just a short walk away.”

“How do you know so much about what’s going on here, Spike?” Frankie replied, staring at the dog with her usual disbelief. “It’s like you’ve been told something I haven’t!”
“I only know what I know Frankie, and what I feel in these bones….well, whatever’s keeping this body together! I don’t know why I feel it really, but if we don’t get going, we’ll never find out. Come on, it might just make sense to me if we keep moving!”

This seemed like a trick to Frankie, but as she craned her neck to peer around the next beckoning curve of the tunnel, she couldn’t help feeling curious and a little excited at the next adventure. “Alright, let’s go. Who knows? There might even be a popcorn and drinks stall round the corner.”
Spike looked at her, with what seemed to Frankie to be a puzzled frown, and she remembered that she hadn’t shared the idea she had earlier, and Spike had probably never even been to a cinema. However, by now nothing would surprise her completely, and if Spike was able to recite the entire script of ‘Toy Story’, she knew that she would just shrug her shoulders and accept it. “Oh never mind – go on, lead the way.”

As they walked into the darkness, it gradually lifted, as very dim light from an unknown source kept everything dull but visible, easing their journey. There was nothing of interest in any part of the passage; it was as if the light show had been a magical trick of their minds and that this underground tunnel was back to boring reality. Also, it seemed to go and on and on, each ash grey blending into mud brown and ink black, as they wound their way round the twilight path.

And then, without warning, yellow light soaked into the final twist of their journey. Their escape had to be close! Frankie and Spike read each other’s minds and their slouching walk turned into an upbeat trot and then a gallop to the finish line. As they ran past the golden walls, they could see the prize ahead of them; blurred at first, and then clear as daylight, was a doorway with a helpful sign glowing above it: EXIT. As they neared it, Frankie’s excitement turned to puzzlement, and her feet ground to a halt. “Well that’s odd. I thought it would be an old door, like the one we came through, but that, well, it’s like the back door of the school!”

“Hmmm – interesting,” came the reply, and Frankie half-expected Spike to be stroking his chin like some scientist discovering a new chemical formula. “Well, further investigation is needed here, Frankie. You go first – I’m not a door handle expert as you well know.”

Without the argument that Spike had come to expect, Frankie did as she was asked, and pulled on the door handle, ready to take in fresh air and sunlight. But just when she had accepted that there was no such thing as a surprise any more, another one jumped up and bit her. Behind the door was another passageway, but this was not part of a winding underground tunnel. What lay before her was both familiar and unfamiliar at the same time. She could see double doors at the end of a long straight corridor and beyond these, tall gates leading to a sloping green. It was very clear exactly where they were now. “Um, I think we’re back in school, but the carpet…and the paint on the walls…and the doors – they’re all different! Just how long have we been gone Spike?”

3 thoughts on “Part 9: The Only Girl in School”