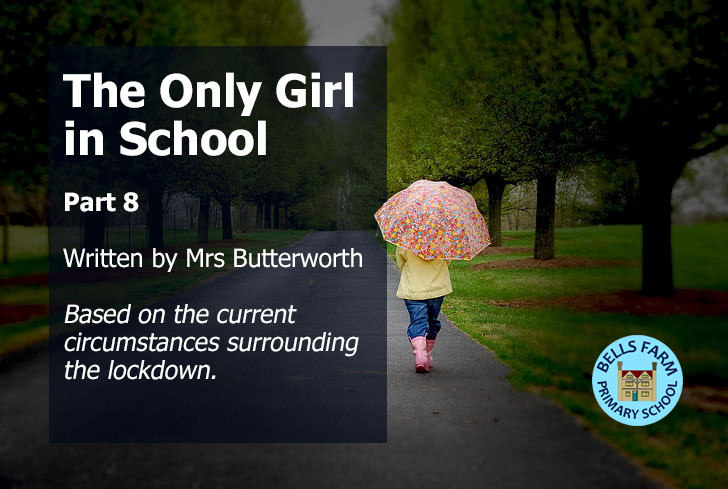 The door was everything you would expect from a secret entrance. Every box had been ticked, from the moss-covered wooden slats blending into the grassy hill surrounding their narrow frame, to the oversized rusty key poking out invitingly beneath a bronze doorknob. Wildflowers lent their thin but crowded stems to the camouflage, their feathery heads blending into a rage of colour. As the friends approached the entrance, the air seemed to still and the noise of the activity behind them faded to a whisper. Frankie found herself on her tiptoes, and could not remember when she had stopped running towards the hillside. Spike was not so cautious, as if stepping into some magical land beyond the unknown was just an everyday walk in the park. He practically galloped towards the door, tail swishing and eyes fixed on the prize. Just for a moment, there was less talking and more panting as his tongue moved eagerly up and down in anticipation of a delightful treat.

“Stop being so dog, Spike!” Frankie urged, “Now’s not the time! We need clear heads and some kind of plan of action, we can’t just …”
“Open it! Open it” I want to see inside, I want to know where it takes us! Please, Frankie, pleeease!”
Frankie sighed a grown-up sigh, as she wondered how to calm her over-excited puppy. “Okay, okay…just let me think for a minute.”
But Spike was in no mood to wait, and he began to jump in and out of the flowery doormat, sending the display into a flurry of waves. “I don’t want us to run out of time Frankie – we have to go now or all of this could be gone!”

While Frankie wondered how on earth the dog knew so much about the fragile future of this strange land, Spike wasted no time in attempting to nudge the key with his nose as it rattled uselessly in its housing. “You didn’t give me fingers and thumbs Frankie! I need you to help!”

“I didn’t give you a stubborn personality either Spike, but yet here we are!” Despite herself, Frankie knew that it was only a matter of time (apparently a very short space of time) before she would have to give in to his pleadings and turn the key to reveal what lay behind the mysterious door. “Right, stand back you little pest – get off the flowers, you’re crushing them! Right back – further…that’s it.”

Frankie took a deep breath and held it in as she turned the key, both hands supporting each other to muscle through the ancient mechanism. With a grinding sound, the bolt finally yielded and Frankie felt the wooden door give slightly and lean heavily against her arm. “You’ve done it Frankie!” cried Spike, his tail in a helicopter spin. Frankie turned the doorknob as quietly as she could, so not to disturb anything or anyone lurking behind, waiting to either greet or eat her. The door opened outwards with a predictable creak, flattening the few flowers which had survived Spike’s excitement, and coming to rest against the hill. Frankie and Spike looked at each other, and then together leant forward and peered into the thick darkness inside. “Well, it’s now or never Frankie. Let’s see where this takes us.” Although his voice was quietly confident, Spike’s face betrayed his nervousness, and Frankie wondered whether a cricket was busying itself in the long grass or she was picking up the sound of the dog’s chattering teeth. Shaking her head to dismiss this slightly odd thought, she replied, “Not a problem Spike. You go first!”

Tentatively, Spike went through the door with Frankie quickly following him in support. The ground beneath their feet was solid – normal, real-life ground unlike the spongy surface they had crossed to get this far. As for the walls, well, they could have been made of chocolate as far as Frankie was concerned because nothing, near or far, was visible, and even as she raised her hands in front of her eyes, she could not make out a finger or thumb. The air all around them was still and cool and the colour of tar, through and through. Just as Frankie thought to herself that surely the daylight behind them would shed some of its brightness through the passageway, the thought lost all meaning as she heard the sound of the door behind them eerily creak to a firm close. “Spike!” she shouted, and at once wanted to cry and laugh at the frightening but truly ridiculous position the friends now found themselves in. Quickly wading back through the blackness, Frankie pushed at the door and when it failed to move a millimetre, reached down for where a doorknob should have been. Nothing. Panicking now, her hands swept along the height and length of the door, finding nothing but coarse dry wood. “Ouch!” she cried, drawing her hand back, her tears welling as she felt the sharp bite of a rogue splinter. “We’re trapped Spike! SPIKE! Spike? Where are you?”

“Over here,” came the pitiful reply from a dog who sounded like he was really regretting his curiosity and bravado, and wishing he could disappear back to the security beneath Frankie’s painted rainbow. “Where is here? It’s all here! I can’t see a thing!” As Frankie found her emotions move from fear to pure and simple anger at Spike’s reckless behaviour which had led them to this underground nightmare, she also found that her sight was becoming accustomed to the darkness. She could now just about make out the dog’s small round shape as he sat forlornly against the passageway wall (very definitely not made of chocolate), with his head bowed, and his tail firmly planted on the ground. Her emotions swung to pity and sorrow for her friend who had never displayed anything other than enthusiasm for anything and everything since their adventure had begun. “I’m sorry Spike. I didn’t mean to shout. It’s just, well, all of this is quite scary, you know? We’re going to have to scream for help unless we can find another way out.”

“Oh I know there’s a way out Frankie,” came the confident reply, “it’s all just a matter of waiting patiently.

“For what exactly, Spike? The Fire Brigade? The Woodcutter? The Fairy Godmother to wave her magic wand?” Frankie’s considerable crossness had returned, and at that very moment she could have happily painted over the dog in thick white gloopy paint. But then, in the moment after that very moment, thoughts of erasing her creation or any other random thoughts that were about to cross her mind evaporated into the darkness. And then darkness gave way to something which was at once beautiful and utterly, completely terrifying…