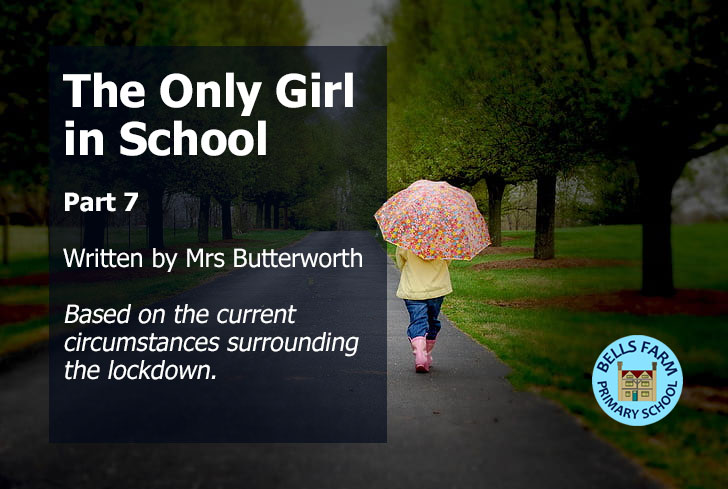 With the music still ringing in her ears, Frankie turned her head to pick up a second tune, and then another. Anthems of year six leavers faded into Mother’s Day songs and then into the thumping beats of rainforest compositions and the familiar rhythms of countless nursery rhymes. The orchestration was a bit off to be fair, but there was something quite beautiful about the wall of sound, and Frankie felt herself floating on a wave of emotion.

“It’s like years of school music all blending into one!” she exclaimed, turning to Spike who was by now nodding vigorously, either in agreement or getting himself lost in the changing rhythms. Either way, the little dog’s beaming grin told Frankie everything she needed to know. “You knew this would happen, didn’t you Spike?”
“This is your school Frankie. You may be the only girl in it at the moment, but heart of the school beats with everything that’s ever happened – good and bad, and I don’t just mean some of those dodgy notes! Whoaaa…just look over there!”

At that moment, Frankie realised that her senses had been so filled with the sounds of the school that she had, just for a second, neglected the sights. In the time it had taken her to pick up the words of every traditional song she could recall from her days as a water – splashing ankle – biter, the field had come alive with memories that extended well beyond her infant days. “Is that a snowman? In this weather?”

The snowman wasn’t alone in being out of place. His round body, made up of seemingly endless layers of chunky cotton wool, couldn’t entirely blot out the equally rounded forms of pillar box red Santa Claus figures, and triangular angels, their halos shedding glitter with every heavenly step. An assortment of creatures followed them – some less seasonal than others – a garishly striped tiger here, an impossibly elongated snake there, and what appeared to be the Easter Bunny, his ears ridiculously long, throwing brightly coloured eggs from a wicker basket. There were giraffes and elephants, sometimes in pairs and peering over the decks of gigantic arks, sometimes alone and aloof, quietly grazing on the lushness of the field. People, large and small, some stick -figured and some made up of the first shapes Frankie ever remembered learning about, roamed and ran, skipped and danced, filling the space with movement and the air with chatter. And along the furrows of the land and the twisting curves of the hills drove a fleet of small vehicles – cardboard fire engines and wooden cars, and trains linked from carriage to carriage by strands of wool, wire and ribbon.

“Fancy something to eat, Frankie? You haven’t had a thing all day.” The question brought Frankie out of a more than slightly bewildered trance and back into the real world. Real world indeed – it was a talking dog who was now expressing his hunger and concern for his friend. “Plenty out there to pick from!” Frankie looked in the direction of Spike’s cocked head towards a picnic blanket, spread across a patch of daisies and bluebells, and protected from blowing away by a seated and smiling tiger and a gigantic caterpillar, who looked a trifle peckish, Frankie thought.
“Mine’s the swirly lollipop and watermelon!” cried Spike as he bolted forward and swiped his lunch before the tiger had a chance to blink. Bending forward, and emboldened by her friend’s cheek, Frankie picked up a huge slice of chocolate cake, and discarding the cherry off the top towards the general direction of the caterpillar, she hungrily devoured every crumb. It tasted almost as good as it looked and although there was a faint papery texture about it, Frankie was famished and unfussy, and began to look for another delicious snack. Meanwhile Spike was tucking into an enormous peach and asked Frankie to join him, but it wasn’t quite what she was looking for and she continued to scour the rest of the blanket. Her wide eyes took in plates of ham, green eggs (“Green? Ugh!), deep bowls of pumpkin soup, bread and jam, bananas in some kind of blue and white striped jackets, hot buttered toast and what appeared to be vast quantities of ginger beer.

In the end, Frankie opted for a smaller sized peach, plum and a pear, one of each, and as she nibbled away, Spike appeared by her side, licking his lips and looking slightly plumper than five minutes ago. “You’ve not seen the best yet Frankie. Come on – follow me!” By this time, Frankie was beginning to tire of her playmate’s exuberance, preferring, just for a moment, to quietly digest her meal and digest the array of sights, sounds and even the smells that surrounded them both. But there was no squashing Spike’s enthusiasm and despite herself, Frankie was once again drawn into his imagination. Just as she thought that seemed the wrong way round – after all, she had drawn him with her imagination, her wandering mind was interrupted once again by his excited cries: “Aha! Just as I thought, and just where I thought!”

Although Frankie’s feet had become accustomed to the soft texture of the ground, she still needed to watch each step and Spike’s rushing ahead, tail frantically spinning, began to try her patience and test her balance. “Hold on! I’m all over the place here! What’s all the rush about?”
“We’re running out of time Frankie! Don’t you see? If we don’t through here in the next few minutes, it’ll be gone!”
Frankie looked blankly at Spike, wondering what “it” was and why time was so crucial. She had almost forgotten her teachers and whether they had noticed that she was spending rather too long sorting her picture out. That was such a yesterday event that it was practically last month. No, her issue was that there was so much to see in this rainbow canopied world that she didn’t want to go anywhere, either quickly or eventually.

Her eyes rested on what Spike was looking at, and thoughts of waddling snowmen and grinning tigers left her thoughts. “Well okay then my funny little friend – let’s go!”