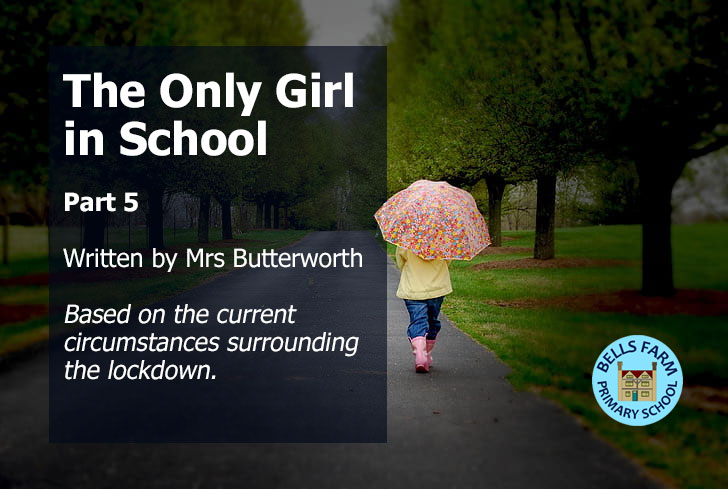 Whatever lay ahead seemed perfectly plain and even a little dull to Frankie. The field stretched out before her and Spike, the familiar sounds of children shouting: “Offside! It’s not fair! I want to be in goal!” were all but a memory from the first sunshine of a promising March. This was the venue of the annual sports days, a time of excitement, fun and growing competitiveness for the children. For the staff, it was a time of head counting, lifting reception children up and down for the sack race and forgetting Mr Gill’s military operational plans within the first five minutes, much to the despair of the PE leader.

Frankie felt her lip wobble just at the possibility of this event not happening in June. “Never mind the Olympics, they had better not cancel the bean bag throwing – I owned that last year!” she thought defiantly. As she continued to ponder the end of the long jump and the missed opportunities for her class to sell their home made lemonade, she didn’t notice the little fur ball tumbling across the green like a Tasmanian Devil, squealing in delight.

“This – is – epic!” came the high pitched exclamation, gradually fading as he rolled further and further from Frankie’s side. “Have we gone through a wardrobe door? Are we in Narnia? No – no ice, no snow, no queen….. Aha! The Midnight Garden – it must be!”

By now, Frankie could barely make out his rapidly fired words, but she had heard enough to add to her astonishment at her freshly created dog. He was a literary genius! A dog that could talk, speak a little French and now apparently engage in book talk. Before she could fully process all the revelations, each one stranger than the last, Spike was back by her feet, panting feverishly and showing no signs of controlling his excitement. “Come on Frankie! There’s so much to do out here – this could not be more perfect!”
Frankie thought that the game was up now and Spike had truly lost his mind. It was a field. A big field, granted, with freshly mown grass and a few white lines started in earnest by Mr Evans before the lockdown. What was Spike seeing that she just couldn’t? “I’m sorry my little furry friend, there’s nothing to do and nothing to see! Except grass. A lot of grass….and … and a ball. Yes over there. That must have been where it ended up after Harry went into free kick overdrive last week on the playground.”

“I don’t think you’re getting it yet Frankie”, came the reply in a voice which implored his friend to take this a bit more seriously. “The possibilities are endless and we haven’t even begun…”
Before Frankie had a chance to argue, which she most certainly was about to do, Spike met her open mouth with a whisper: “sshhh – come with me.”
Reluctantly, Frankie followed, but just to demonstrate that she really was not one bit happy, she folded her arms and stomped. Stomp, stomp, stomp. “ Hmmm…he hasn’t noticed.” Bigger stomp, bigger stomp, bigger stomp. Just when she thought that she might actually do serious damage to her ankles, the ground beneath her feet dipped, taking the temper out of her trainers, and causing her knees to buckle. Frankie instinctively threw her arms out to the side to steady herself, and looking down to see what mole hole had caused her to lose balance, she felt herself swaying and spinning, grabbing at empty air and letting out a loud continuous squeal of fright.

The last question Frankie remembered posing to no one in particular and before her world was still again, was a shrill plea: “WHAT’S HAPPENING TO ME?” The last sight she saw was Spike, spinning around her head, his small round body lifted from the ground as easily as Autumn leaves in a storm. She closed her eyes tightly to shut out her fear and to shield them from the intensely bright light which had cut through the sky and now dazzled and danced all around her. Helplessly, she felt her body twist and spiral at the mercy of the mysterious force – neither a warm nor a cold wind, and in fact, if Frankie was not mistaken, a force which felt like gigantic pair of hands, rolling her round like a cat with a prized toy. Dizziness overcame her and as her voice cried out for the world to stop turning, she knew that whatever this was had absolutely no intention of meeting her demands. She felt her body lift higher and higher from the safety of the field, and even if she could face opening her eyes to the blinding light, she knew she couldn’t face seeing the earth disappear from under her feet. Instead she squeezed them shut, tighter still, and as the world grew darker, her mind drifted away from consciousness.

And then all was still. Frankie tentatively opened her eyes and found the blueness of the sky broken only by a wisp of cloud. That could only mean that unless the world had turned upside down, she was flat on her back. If her memory served her well, she had definitely been standing, if quite unsteadily the last time she looked. It was tempting to stay exactly where she was. The absence of any sound at all was strangely comforting and for a moment, Frankie thought she would like to lie there forever.
It was not to be.

A slight nudge at her arm turned into an urgent and rather irritating call for her to get to her feet, accompanied by a familiar voice. “What did I tell you Frankie? Didn’t I tell you this was perfect? Didn’t I say we would have an adventure?”

Her last glimpse of Spike had been a whirling ball of black fur, spinning as uncontrollably as she was, and seeming just as put out by the whole business. Had that been minutes or days ago? The dog seemed no worse for his ordeal and actually seemed to have grown in both size and confidence. Just as Frankie was wondering whether the increased size was down to a fluffiness replacing his spikes of painted fur, as if he had been tumble dried with some miraculous fabric softener, her musing was interrupted by the strangest sights now coming into view as she stood up. The grass was still green: tick. The sky was still blue: double tick. But everything that lay before her, everything and everybody in her line of vision was different. Not different in the sense that familiar things had changed, or what was not there before was now in front her, but quite literally different in the most extraordinary way. Frankie instantly knew that she had never, and would never, see anything like this again, for as long as she lived.

2 thoughts on “Part 5: The Only Girl in School”