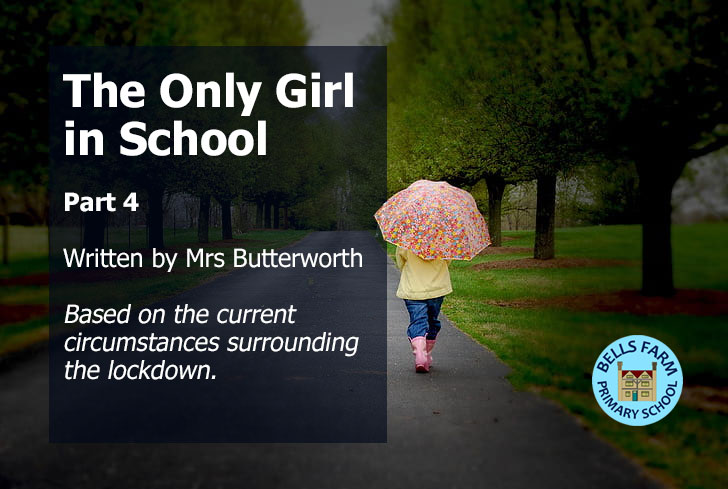 Everything seemed to stand still, and the singing infants faded far into the background. Frankie turned her head slowly, and out of the corner of her eye, glimpsed the merest flash of movement. Something had darted towards the year five doorway. “Good,” thought Frankie, “whatever it is, it won’t be able to get any further.”

With baby steps, Frankie began to move up the corridor, her heart ready to confront the ‘thing’ but her head telling her to run to the safety of the adults. “Breathe,” she said out loud, surprising herself with the steadiness of her voice. Whatever this was, it certainly broke her routine, and that could only be a good thing. Her steps grew more confident and jutting out her chin as she turned the corner, she called out: “Right, whoever you are, you nearly gave me a…..whooooahhhh!”

Frankie jumped back, almost falling onto the mountain of cereal boxes and juice cartons which had been dumped yesterday, rather unceremoniously, outside the front office. There, crouching in the corner of Mrs Calbreath’s classroom door was a small black creature, curled into a frightened ball of spikey fur and staring back at Frankie with close set uneven eyes. “ Um….hello…er…Spike?” Frankie croaked by way of introduction. With that she coughed, having surprised herself at her usual strong vocal cords letting her down at such a key moment.

Suddenly there was a rumble of action coming from the other end of the corridor. Looking to her left, Frankie saw the unmistakable form of Miss Coghlan with what looked like a PE shirt wrapped round her head, holding out an ear thermometer as she gradually moved towards her. “Easy now Frankie – stay just where you are. Cover your mouth with your sleeve and when I count to three, slowly enter the medical room, step into the black bin liner on the medical bed and…

“Miss Coghlan, I’m fine!” Frankie interrupted. “I think some of that rainbow glitter caught the back of my throat, that’s all. Now you just go back to the boys and I’ll be more careful next time.”

Frankie thought that she detected a tear of relief in Miss Coghlan’s left eye, despite the distance between the two of them. The teacher’s right eye was obscured by one sleeve of the t shirt which had obviously been grabbed in a hurry. “If that’s a year six shirt, Miss will have more to worry about than catching that virus,” thought Frankie, chuckling to herself.
“Fine, good, lovely. You take care now Frankie. We’re just going to wash the Lego in Dettol now, no rush to come back.” Miss Coghlan disappeared as quickly as she had emerged, leaving Frankie alone again…..except for a most peculiar looking dog.

“That was close!” Frankie exclaimed, her voice back to normal, if perhaps a little too bold for Spike, who by now had started to stretch his spindly limbs tentatively, only to curl back up again.

“ Frankie, for goodness sake, could you just tone it down a bit? I’m having a spot of bother getting used to all this. One minute I’m staring up at one very wonky rainbow and the next I’m trying to avoid whatever smell that is coming from those toilets! I mean does anyone actually clean up round here. Well? Do they? Frankie?”
But Frankie was almost out of earshot, finding herself lying on top of the now crushed boxes of sugar free cornflakes, staring at the ceiling and wondering how she got there. As she struggled to get back on her feet, she was aware of a furry face appearing over the toppled boxes, a sight which quickened her movements as she sprang into a sitting position, her back against the stock cupboard door.

“Are you all right Frankie? That was quite a tumble. You want to be careful you don’t hurt yourself – I don’t fancy your chances with those two down there. Whatever phonics is, that’s all I’ve heard them talk about so far, and it doesn’t sound like it would be any use in a crisis!”
Frankie smiled, despite herself and whatever she was feeling. Fear? No, Spike was being very friendly and familiar and she hadn’t spotted any teeth yet in that animated mouth. Amazement? Well, yes, that was a very good word, along with shock, surprise and every other open- mouthed emotion that she could recall from the working wall.
“You talk. You’re a talking dog. You’re a talking dog who I painted yesterday. Sorry about the eyes. Wish I’d taken more care now, but then how was I to know that this would happen? What’s happened anyway? Am I going mad?”

Spike settled into a comfortable position, his spider-like legs folding under his rather too round body and his small toothless mouth shaping into an unmistakeable grin. A grinning, made up, oddly shaped dog who talked. Frankie decided that she had gone past mad and that no one, just no one, would ever believe a word of this.

“Not mad no. Just hopeful I suppose, and that’s what these rainbows are supposed to be about,” came the little dog’s thoughtful reply. “You hoped for something to stop you feeling lonely and bored, and, well, here I am!” Spike sighed, his comedy eyes trying to be serious for a moment but failing miserably. Frankie giggled, but then became very aware that despite his funny appearance, Spike actually and quite suddenly seemed a little forlorn.

“Can I stroke you? I mean, is that even possible?” Frankie asked, her hand cautiously extended and her eyes fixed on Spike’s pupils, rattling around comically in their plastic cases.
“I suppose so,” came the reply “no one ever has before. Well, no one has ever done anything to me. You drew me and here I am, all new and everything! And yet, I do feel I’ve been here before. What do you call it, déjà vu? Oh my goodness, I speak French! What’s French? Ca va bien? Oh there I go again!”

With that, Spike became quite frenzied and began to jump from left to right, panting frantically as he entered into a whole new word of self-discovery. “I can jump! I’m bilingual! I’m a bilingual dog! I can go this way and that way – look, see!”

Frankie laid both her hands on Spike’s back and slowly brought them up to cup his face to calm and quieten him. His fur was surprisingly soft and sleek, and Frankie inwardly congratulated herself on taking the time with those brush strokes. “Spike – there is so much to talk about, but not here. The teachers are bound to come running if they hear you and I really think that would finish them off.”

Spike settled himself into a sitting position, under the comforting guidance of Frankie’s hands. “Not to worry on that score, Frankie,” he replied in a quiet steady voice. “What I do know is that only you can see or hear me. I’m your adventure – no one else’s. Now I suggest we get started. Let’s get out of here while they’re sterilising everything in sight.”
And although Frankie was quite taken aback by Spike’s message, she quickly recovered enough to take his point. Within seconds, the Only Girl in School was tiptoeing down the corridor with the Only Talking Dog in the Universe, past year six, past the small boys and busy teachers, through the library and out of the door to whatever lay ahead.

3 thoughts on “Part 4: The Only Girl in School”