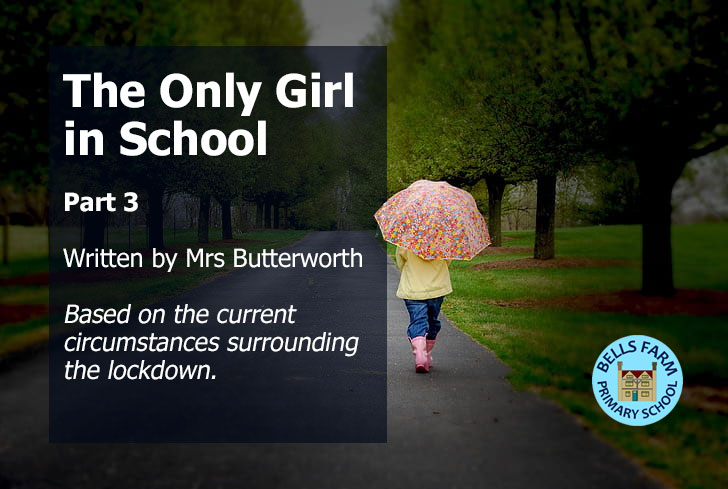 By week two, day two, Frankie wondered if there wasn’t a single sentence she hadn’t punctuated properly, or a number she hadn’t squared or divided. A month ago, she didn’t think it possible that she would miss her talk partner, regularly changed of course by Mr Johnston due to Frankie’s tendency to talk about anything other than the task he had set. Now she longed for the busy classroom, the laughter and even the strange smells, mostly, Frankie believed, coming from the male section of the classroom.

Of course, Miss Williams and Miss Coghlan talked kindly to both her and the smaller and bigger boys, but she could tell that it just wasn’t the same for the teachers either. They missed their friends too, she thought, and the cackling from the staffroom drowning out Mr Baddhan’s attempts to run his computing club felt like a thing of the past. It didn’t help that their snacks had run dry. Every morsel of chocolate, every crisp crumb and custard cream had been seized by Mrs Butterworth, who no one had not seen since mid – morning Monday when she had sprayed herself in sanitizer and disappeared with the last of the disposable gloves.

“She’ll be back,” thought Frankie “but not before I sort out some kind of adventure to get through this.”

But what form would that adventure take? With none of her friends available and the company offered by pre-school boys every morning being quite tiresome, the possibilities seemed limited. Jacob and Harry were okay, and could possibly be fellow adventurers, but they both seemed content to play basketball while there was no competition for the hoops. There was the forest school to explore, until she remembered that it was just an overgrown hedge with old CDs hung on every other branch by the cheery Mrs Hill, whose budget had run out two years ago, taking away her dream of log cabins and sensory trails. As for the so called woodland walk – well, that had long lost all of its magical possibilities since Mr Evans had cut it back it beyond recognition in an attempt to save the playground surface from buckling any further.

As Frankie’s mind emptied of ideas, her paintbrush worked harder at the formation of a small unicorn at the end of her rainbow. The legs were a bit short and the body a bit bluer than she had planned, (the white paint had still not been found), and her artistic skills were being challenged beyond her patience. Realising that the chance of this mythical creature giving her any hope of a break from the routine of the day, Frankie found herself swirling her brush in the black paint pot. Without giving it another thought, she painted over her unicorn with long dark strokes, turning it into a spikey ball with a jagged head and sharp ears. With the last touches of her brush, she finished off her creation with spindly, spidery legs and tail.

Frankie stood back, looked at her painting and sighed deeply. As she considered joining the boys on the smallest and least competitive basketball team in the universe, she was surprised to find Miss Williams looking over her shoulder, quietly smiling at Frankie’s efforts.
“It was a unicorn. Now it’s a … it’s a …sort of black pointy thing with a head and legs,” Frankie muttered weakly.

Frankie could hardly contain her excitement. No teacher had ever willingly parted with a glue stick since the 2017 national shortage, and that alone surprised and delighted her. But more than that, the tub contained the treasures of Christmas and Art Week combined. Tiny beads and sparkling sequins lay inside, wrapped in richly coloured ribbons and threads. And there at the bottom of the treasure trove were the perfect additions to her artistic creation: two perfectly silly googly eyes.

Excitedly, Frankie glued the eyes in place, one slightly higher than the other, and perhaps a little too close together. Then, as she stood back to check her work, she found herself more pleased than she could have ever imagined. “That’s a dog alright! His name will be …. Spike!”

She laughed, and turned to find Miss Williams and Miss Coghlan laughing along with her. Instantly, Frankie felt happier and less alone. That was until she realised that their attention was taken by the small boys, who were now tunelessly singing along to ‘Baby Shark’. At this point, she realised that she was truly on her own – too big to do something pointless but cute, and not quite old enough to hang out with teachers who had clearly reached the depths of their own boredom. Sadly, and going completely unnoticed, Frankie picked up her rainbow picture and quietly left the room.

“I’ll find somewhere to hang this, somewhere for other people to see it as a symbol of hope,” Frankie thought, scouring the walls for the best display area. As she spied the ‘Works of Art’ board, she lay the painting on the ground and started to clear a space, removing the inferior creations of the other children who weren’t even here in her time of need. “That should do it,” she said out loud, and bent down to retrieve her rainbow masterpiece.

Frankie stared at her picture. Something was wrong. Something so obvious but yet too unbelievable for Frankie to take in. The rainbow was there in all its glory, indigo blending with the wrong shade of blue, and the bright- not -quite – right yellow standing out a little too sharply. But where the little black dog now known as Spike had sat, bottom left, just below the dodgy shade of violet, there was the unmistakable form of her blue unicorn, with its short legs and crooked horn.

“Um…but…wait a moment….” she spluttered, turning the picture over in a pointless attempt to locate the missing dog. By now, her face was an open-mouthed cartoon, looking left and right and up and down, vainly hoping to find that she had somehow picked up the wrong picture. Then, as irritation and plain annoyance took over, she stomped back towards the classroom along the corridor that had seen her happily cartwheeling less than a week ago.

Frankie was almost at the classroom door, preparing to confront her trickster teachers, when something caused her to stop dead in her tracks.

Someone or something was behind her. She felt warm breath hit the back of her legs and heard the unmistakable sound of her name being repeated in an unrecognisable voice…

6 thoughts on “Part 3: The Only Girl in School”