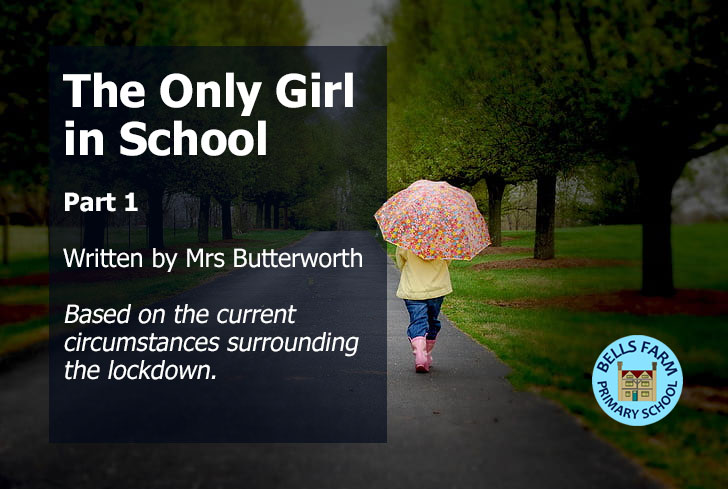 Frankie was the only girl in school.

“Amazing!” she thought. That was day one. By day three, the choice of four toilets, first pick of the carefully prepared tuna wraps and Mrs Butterworth allowing her to practise her cartwheels down the corridor, were all experiences that were wearing thin.

This was the start of something called lockdown, and as her mum was a key worker, Frankie had the privilege of being allowed to go to school every day. Singing “Happy Birthday” twice every time she and her friends washed their hands had seemed fun two weeks ago, but singing it on her own wasn’t quite the same.

Of course, there were boys as well. Seven of them to begin with, and even three more girls on day one. But they were the small sort of girl – the type who had to practise their phonics and do toddler yoga in the morning, and only wanted to watch “Frozen” in free time. At playtimes, Frankie watched Miss Williams trying to teach the small people how to work a hula hoop, and felt her despair as each of them twisted the hoops around the waists and let them fall limply to the floor. The small people also ignored personal space, and Mrs Butterworth spent her day backing away from them to the required two metre distance if they even looked like they were about to sneeze. Mrs Butterworth was worried you see, being elderly, and Frankie wasn’t sure if she was over seventy, especially when the light caught her face at the wrong angle. She just knew that she was quite old and Mrs Butterworth was also concerned about her own mother, who had to be at least a hundred by now.

To be fair, at least she didn’t have to accompany small boys to the toilet like the bigger boys did. When they came back telling Mrs Butterworth that the soap was running out, Frankie thought that the head teacher might faint. Instead, she signalled wildly towards the gents toilet, muttering that no male staff were in today. Frankie was beginning to think that this was a sign of things to come, that every conversation was going to be about germs, safety and this pesky virus. Yawn.

By the second afternoon, all of the teachers, three in total, had lightened up a bit. Miss Williams was well into the planned routines of exercise, maths, English and then art and free time. Frankie noticed that playtimes weren’t ruled by the dreaded bell and became a little longer as each day passed. Painting became a bit more free flow as well, and the teachers soon stopped interfering with her rainbow painting, even when she went over the lines which Mrs B had spent a little bit too much time getting just right. Indigo was a tricky colour to mix, if it even was a colour, and not one of the teachers had any success with finding white paint to lighten the blue, so they happily left her and Harry to it.

When Mrs Knipe and Mrs Butterworth starting foraging in teachers’ cupboards for food, a few treasures emerged which brightened up the days no end. Shrieks of delight echoed around the school, as one by one the hidden gems of choc chip cookies, custard creams and jelly sweets were uncovered, and Frankie watched in awe as her teachers morphed into pirates, throwing their stolen goods into Sainsbury’s swag bags. The leftover crisps from the Christmas parties didn’t quite reach the children as Mrs B confessed that her diet had gone out of the window and that now was a good time to fatten up in preparation for the weeks ahead. Frankie knew that toilet rolls were hard to come by and disinfectant was as rare as rubies, but she didn’t remember cheese and onion crisps being in short supply.

The Haribo actually made it as far as her three person cinema experience, and by then, the teachers were relaxed enough to throw the packets in the general direction of Frankie and the boys and get on with their tea drinking and gossiping. By the end of the week, there was less fuss about the rating of some of the films.
“PG for slightly scarey scenes? Hmmm…you don’t scare easily do you Frankie? No, thought not. On it goes!” Were these the same people who only a week ago were insisting on hands behind backs when walking single file down the corridor? Frankie thought that school was never going to be the same again, and part of her wondered whether this strange new world was a good thing or not.

6 thoughts on “Part 1: The Only Girl in School”